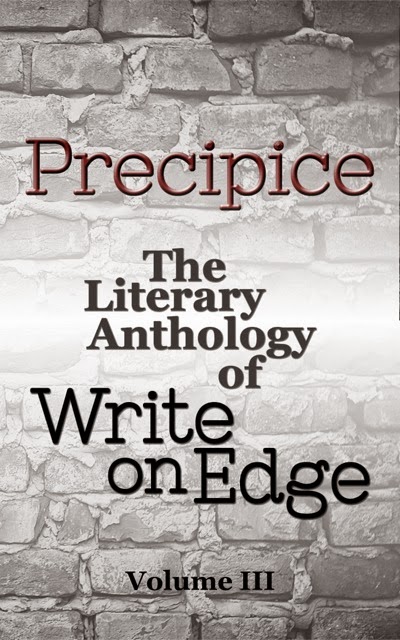 If you don't want to pre-order, mark November 17th as the day you will buy this third volume of Precipice, the literary anthology of Write On Edge.

If you want to have a physical, dead-tree, paperback copy because you think your e-book reading device is eating your brain, your date is December 1st.

If you just want a paperback copy as a companion for your other paperbacks, that's good too. Your date is still December 1st.

Precipice 2014 will make an ideal Christma-solsti-hanu-kwanz-akkah gift for those of you who participate in the gift-giving festivities of December.

It'll make an even better "I just had to get this for you because I love you that much" present for any of the other days of the year.

The point, honored guests, that I am trying to make is that you don't want to miss adding this volume to your Precipice collection.

If you're tired of all things Shelton Keys Dunning, Precipice 2014 is your chance to check out amazing authors from the talented Write On Edge community. There is something in this volume for everyone!

This is an immoral imperative. This is mandatory fun.
This is a basic human necessity.
So go get it.

Posted by Shelton Keys Dunning at 11:20 AM 2 comments:

A Toast to Love and Wedded Bliss


They wanted to keep their marriage on the down-low. Technically, I’m breaking a family trust by telling this story, but I can’t help it. So the names and locations are omitted to keep confidence.

Their marriage, whether they believe so or not, is a celebration of hope and acceptance. Due to their ages, they are probably more aware of their finite future together than any other newly-married couple in America. And they took the plunge anyway.

Because love this beautiful is too powerful to keep on the-down-low.

I have only been in Grandma’s life a little over ten years. But during those years, I never once felt like I didn't belong in her family. She accepted me straight-up with open arms and a welcome home.

And what I have learned from her in those ten years cannot be quantified. She’s the most amazing person that I am privileged to know.

Grandma is fond of military men – her first marriage was to an Army man, the second to a Navy pilot who survived Pearl Harbor -- and her new husband is no exception. Her now-husband was a Rear-Admiral in World War II and for a time during his military career, he worked at the Pentagon. His dry sense of humor is still quick and sharp, and he still enjoys a finger or two of a fine whiskey neat.

I want it known that I admire Grandma beyond measure. I know of the tragedies that have painted her life with devastating sorrow, the kind of sorrows that most would never recover from and no one would blame them for it. Yet, she is the phoenix that rises from the ashes, more radiant and glorious than ever.

And her husband I am equally in awe of. Again, open-hearted and accepting, from the first moment I met him. A man who knows the price of sacrifice, a man who made the call again and again, knowing that his decisions impacted the lives of his men in the Pacific Theater and the lives their loved-ones back home.

They don’t make men like him anymore.  His breed is so rare that I wonder how I could possibly be so fortunate to have met him. And I get to call him Grandpa now.

My heart is so full: I’m having difficulty finding the words I want to say, or even the words I should be saying. I only know that words must be said.

A toast to the happy couple, who represent hope and heroism in their truest, purest form, an inspiration to all; May God continue to bless and keep you, and give you a thousand years of happiness each and every day.